The Alternative School staff and students had a day's climbing at Blackford Quarry to get to know each other, build trust, challenge themselves and have fun.

Venture Scotland provided this opportunity free of charge to build a partnership with the Spartans Community Football Academy and to promote their outdoor courses for young people aged 16 +.

From the Alternative School, Lewis Frail (S4), is our keenest climber and here he describes what the experience meant to him.

"We went to Blackford Quarry to go rock climbing. We had to wear a harness and a hemet and use ropes. The staff were Stewart, Nadia, Emma and Tolga. Two staff from Venture Scotland were Sarah and Robin. They were nice instructors because they helped us to climb. They were laid back but they were not laid back when it came to the rules. They were rule enforcers.

There were a few health and safety instructions such as, we were only allowed to climb on one side of the quarry because of loose rocks on the other side. Robin shouted a warning when he threw the rope down for the first time. At the top of the abseil I had to wear the harness and the helmet and I was not allowed near the edge.

The most challenging thing for me was going up the second last and highest climb. It was hard for me to find the bits to hold on to with my hands. I knew I wouldn't give up because if I say I'm going to do something in climbing I do it. When I climb and I get to the high bit where most people would look down and be scared it actually makes me feel calm and happy. When I look out from the top, I enjoy the view and it gives me time to think. It gives me a feeling of relief. 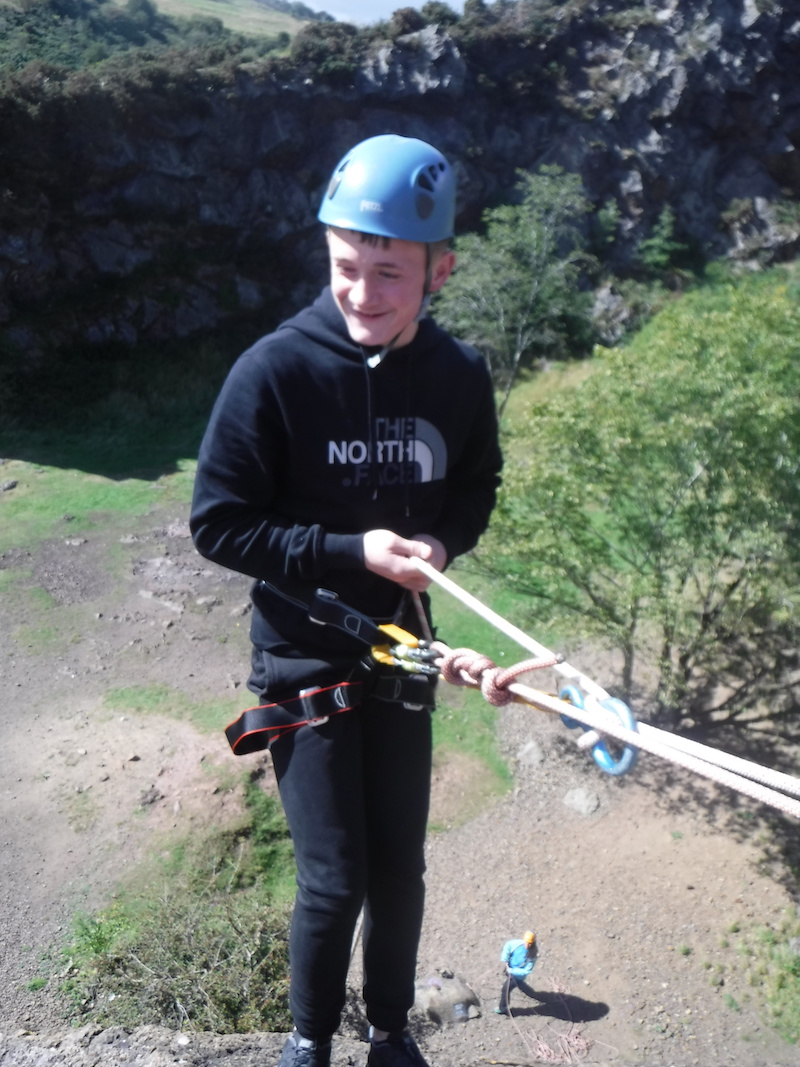 Overall, I learned that I prefer indoor climbing at Ratho because of the weather issues. It was quite windy and it started raining towards the end so the instructor said that we had to stop. Blackford Quarry was my favourite outdoor activity that I have done at Spartans so far.

I recommend that others try rock climbing because it can help you get over your fear of heights and try something new. If you try climbing higher than before or if you abseil you will be able to face more challenges in other parts of your life. I think that this is true for me because when you achieve something that you never thought that you could do, it puts your mind to other things. So if there is something else you think that you could never do, but then you try it it's not as bad as you think that it is going to be. I am adventurous in general, like most teens, but climbing has built my confidence. Climbing builds your physical strength and your mental strength because it makes you concentrate because sometimes when people do it they without harnesses and if they make one mistake they may die."