Football: More than a game

Garry Betts our para football officer recently completed an 8 week course delivered by the University of Edinburgh. It explored the world of football, its role in the world today, finances, clubs, nations, rivalries and much more. Garry tells us more about his experiences in this blog.

The Spartans Community Football Academy is a charity. It has been running for 10 years in the North of Edinburgh, according to the Scottish Index of Multiple Deprivation (SIMD), an area within some of the most deprived areas in Scotland.

At Spartans Community Football Academy we have an open policy for anyone who feels they will benefit from Walking Football. There are currently c.20 walking footballers that come to The Academy every week. The majority of players are male over 50, 2 women players over 50 and 8 men in the age bracket of 21- 40 (including 2 carers). Many differing health issues exist, including physical disability, learning disability and mental health issues.

Walking Football helps with both physical and mental health. The playing of the game gives an hour of moving on the pitch. The mental benefit comes from the both physical wellbeing of playing and the social of the post-match cup of tea and biscuit, interacting with team mates, socialising and joining in a quiz. We also have a fun "Player Of The Week", who gets to take home the Silver Cup but not necessarily for the best player. One member stated that:

“Walking football, gets me out of the house more than once a week now because I also play at other groups, the camaraderie of the folk is fantastic &and I feel more confident and fitter now”. 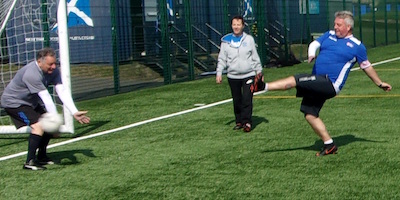 On evenings in the week The Academy run FooTEA clubs that welcome young people aged from 7-15 years. Participants can enjoy multi-sport activities, games or relax and hang out in the youth work space. Everyone gets a nutritious evening meal. FooTEA clubs are delivered by the Youth Work team and are an opportunity for the youth workers to build strong, trusting relationships with local young people. On Thursdays MC FooTEA Club (multi-cultural) welcomes children from a wide range of ethnic and cultural backgrounds. This service acts to signpost children and families towards mainstream youth work and support services that they may not otherwise know about or have previously accessed. One member stated that:

"It’s a place to have fun with your mates”

This member is now a volunteer.

FooTEA breaks down any stigma of kids getting a free meal because the kids see the provision as part of what the club is about. The social aspects are that the kids have a safe environment off the streets where they can enjoy themselves and interact with their peers an  see that there is an alternative to participating in some of the social problems that are around this area.

Find out more about The Academy's youth work and walking football here.